Let me help you with your family lineage and grow your tree.  I provide a research service as well as standard reports (family tree, pedigree chart and family group chart). All sources are cited and any primary sources, documents or photos found in my research, that don’t incur extra costs, are included.  You will also have the option to purchase original source documents as you wish. Photos you provide will be professionally scanned to include in the reports.

As well as the more classic genealogical services, I love to bring the ancestors to life through story. I look beneath the sources for what is hidden and integrate historical research to honour the person in the fullness of their life in a certain time and place. Sometimes there are salacious and even shocking details that come to light but this is the stuff that makes our ancestors
​human and compelling. ​

The facts behind the story:
​
Edna was my Grandmother’s sister, my Great Aunt.   I came across a divorce notice (see below).  Edna was named as sleeping with a Herbert Hewitt at two different properties.   She claimed it was after Robert had deserted her.  The court ruled in Robert’s favour and dismissed Edna’s claim.  I found this very disquieting as Edna’s liaisons were described in detail and yet her claim of desertion dismissed.  She was blamed for the end of her marriage. This was not unusual for women during this era, to be treated so unjustly by the legal processes.
Also, there were only two children mentioned but Edna had three children.  There is another article which states that Robert didn’t believe the smallest boy was his.  Again the legal system was on his side.   Four years later Robert went back to court to reduce his maintenance payments. He was a musician and blamed the advent of the Talkies for his request as he was now reduced to playing music on the ferries for a pittance.  Needless to say his maintenance payments were substantially reduced!
I had heard some bits and pieces of Edna’s life from a distant family member. She had been very close to her brother Leslie who was a successful architect. He did in fact estrange himself from his family. Edna eventually married a policeman, Frank, and had two more children. Sadly her two boys were put into an orphanage as Frank refused to care for them. Her daughter stayed. As an old man, Frank told his son that Edna had trapped him into marrying her. He claimed that she had fallen pregnant to him and threatened to front up at the police station to name and shame him if he didn’t marry her. I can only imagine my poor Aunt was absolutely desperate as a single mother with three children in the Depression. It obviously didn’t work out with Herbert.

Henry and Elizabeth Peard were alive in the time that the potato famine devastated Ireland, beginning in 1845.  Around a million people starved or died of disease and as many fled for other lands, often perishing on the journey. It was the Catholic population who suffered the most as they were poor tenant farmers whose main source of sustenance was obliterated.1   Henry and Elizabeth were Protestant wealthy landowners and had little sympathy for their Catholic country men.  At a submission to a Parliamentary Inquiry about the poor in 1936, Henry said, ‘the devoutness of many Catholic labourers prevents them from earning more money as they observe too many church holidays and attending stations to confess, [which] take a good deal from what a labourer could earn. There are 11 holidays kept.’ 2   In contrast, Henry’s family were seen as ‘northerners, protestants, well educated, industrious. They are a credit to the country.’ 3
Henry Hawke Peard married Elizabeth Cathrow, (whose family was of similar ilk),4 on June 26th, 1826 in Great Amwell, Hertfordshire, England.5   Shockingly for the time Elizabeth was already pregnant as their daughter Elizabeth Kathryn was born only six months later on December 12th, 1826 in Calverton, Nottinghamshire, England.6 They put 113 odd miles between Elizabeth’s family and the birth place of baby Elizabeth, taking their time to wander onto Ireland. 7
By mid 1827 the family were living in Coole Abbey, Fermoy, Cork County.8 Henry had inherited this substantial family home on 157 acres plus many other parcels of land and houses.9  The Peards had 10 more healthy children in quick succession all born at Coole Abbey between 1829 and 1843; Richard McCullough,  William Henry, Anne Mary, Marion Cotton, Alberta Disney, George Spotwood, Henry Turner, Emma Fanny, Charles Harte and Augusta Maria. 10 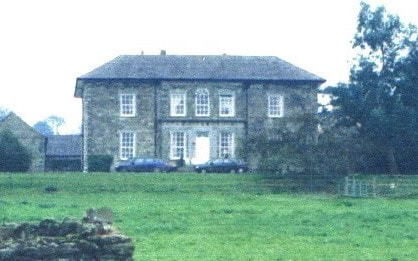 COOLE ABBEY, FERMOY CORK COUNTY             11
​        In early 1843 the Peards moved to the Channel Islands.12 It could be that little Augusta was becoming sickly and they were seeking a healthier climate for her recovery.  They settled in St Helier on Jersey13 and were part of an influx of wealthy British immigrants attracted by the sun, sea and low taxes in the 1840s.14 The family lived in a house on Royal Crescent15 'inhabited chiefly by the English .... considerably improved in its appearance by the Theatre, which forms the centre of the arch, and whose pretty Greek porticos an agreeable relief to the plainness of the buildings that flank it.’ 16 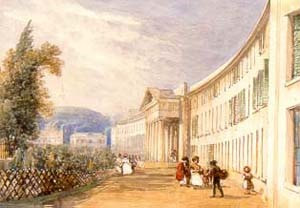